Do you believe that people are leaving California en masse? Well, if you do, I’ve got a bridge in Brooklyn for sale and it’s got your name on it. All jokes aside, today we’re talking about the California mass exodus – that never happened. Because it’s not happening.

All of the data I can find is suggesting that people are not moving much more, if at all, out of the state than they have in previous years. It’s really popular to blame taxes; it’s really popular to blame COVID and politics in general and look at a small section of data and suggest there’s a large trend happening. Let me share some stuff that I just found recently that’s totally debunking that, and what it really means for you as someone who might be looking to buy or sell here in the East Bay.

To start off, I’ve got this Wall Street Journal article that was published on March 5th that quotes the San Francisco Chronicle, which tweeted out that only about 3.7% of the Bay Area population actually moved during the pandemic thus far. When you go back a couple of weeks to an article that they published in the middle of February, they did an analysis of address changes filed with the United States Postal Service, specifically in San Francisco. What they found out, interestingly, was that of the top 20 locations of where these address changes went to, all of them, except for one, we’re in the state of California. In addition, of the top 15, eight were within the Bay Area.

There is no evidence that wealthy households are leaving California en masse.

Then, there is this brief, filed from the California policy lab out of Berkeley that analyzed 1) all the movement of people in the state, and  2) the demographics of people from their race, age, and socio-economic backgrounds. From these data, they found out where those people went and how many of them went there. The data they have did not show any trend that said millionaires are leaving, or people are fleeing to Texas en masse, or any of that sort of thing. What they found was simply a reorganization of where people are going.

San Franciscans are leaving SF, but not CA.

In general, what we found is that a lot of people from San Francisco are coming here to Alameda County, Oakland, and Berkeley. That’s also what I see on the ground personally when I go and represent buyers and sellers and also what the data from the United States Postal Service and California Policy Lab support.

They want a larger house, but they can’t get it over there so they’re coming over here where the price per square foot is more affordable, or where they don’t have to commute anymore, or where they’re a little bit closer to nature, like in Orinda, for example. Additionally, some of them are also heading to the places where we used to usually go for a vacation like the Sierra counties. It’s also probably why it is so hard to get a vacation rental right now in Tahoe—it’s because a lot of people is suddenly moving there.

So where did all this conversation about people moving and leaving California en masse come from?

Well, number one, I think, is from really good clickbait items. Click bait get people all excited, fired up, and fearful. Admittedly, I’ve also clicked on a number of those videos and watched them.

However, that’s not to say that people aren’t leaving California; they certainly are. I have clients who have relocated to Portland and Austin respectively. That is real. That is happening. However, it’s not happening en masse. In fact, there are at least five factors cited in some of the articles I’ve researched that are indicating that the population is really shifting, and it’s more than just a COVID-related or tax policies-related move.

People are actually having babies less often. California’s birth rate is down and is lower than it was in history. For context, there were,  hundreds of thousands of people being added to the population just from births every year, and that is steadily declining. And so that’s getting rolled into the population figures. 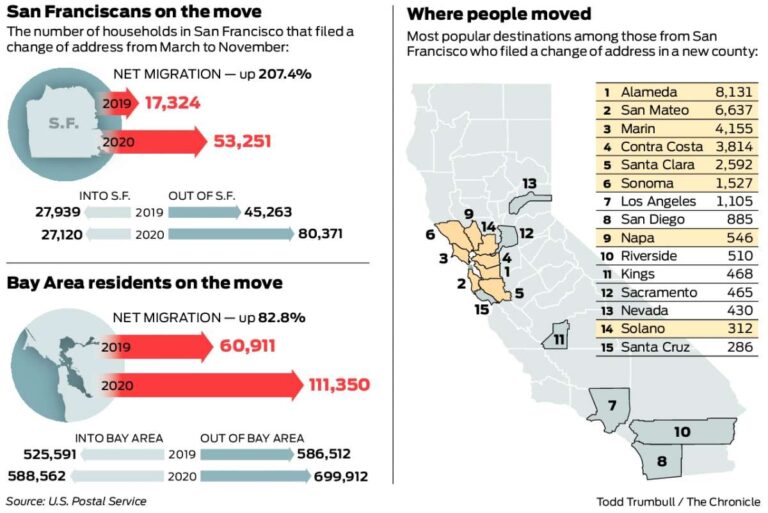 Additionally, interstate migration has changed pretty drastically as well. A lot more people are leaving California than are coming back into the state from other states. So that net is negative.

The one group of people that’s coming out of the state that sort of fills the net outflow are the international immigrants. The state of California used to have something like 27% of its citizens who were born outside of the United States that moved here. And that group, that demographic, turns out to have migrated out and shift their migration patterns since COVID started.

Before COVID, data suggests that a lot of people land here in California when they first come to this country, and then go elsewhere after a number of years. However, due to COVID, they’ve started moving out of CA sooner.

Additionally, one thing I found super interesting and one trend that we’re definitely going to want to pay attention to, relative to affordable housing and income and wages, is the socio-economic balance of who’s leaving California and who’s coming. The one group of people, from an education standpoint, coming in are the people who have four-year bachelor degrees. On the other hand, middle or lower-class or blue-collar workers are leaving because many of those jobs don’t exist here anymore in the way they used to.

However, the tech and the white-collar jobs are still pretty prevalent in the state. So that is attracting that net group which stayed.

The other slightly morbid thing that you should consider when looking at these statistics is that the death rate has significantly increased since the beginning of Coronavirus. I was reading that since COVID had started, the death rate in the state of California has increased two, three, or even four times, in some cases, on a monthly or quarterly basis.

What happens when you combine all five?

So when you couple the fact that 1) people are having babies less often with 2) a higher death rate, 3) with fewer people coming in than leaving because of jobs and what have you, and 4) the biggest group of people that used to come into the state, (the international immigrants) suddenly started moving to other states, you get a net minus. You see the population decline, or at least grow at a slower pace than before. Then, when you look at it through those lenses, it starts to make a little bit of sense.

People are re-examining what home means to them.

Ultimately, it’s not just that people are sick of California. It’s not just people trying to get out of paying the state income tax and the higher cost of living. Yes, there are those people, too but it’s not the mass trend that we’re hearing about. Because when you’re on the ground, you’re writing offers, you’re putting property out in the market, what I can tell you is that it’s still quite competitive.

Above all, the coronavirus pandemic made people re-examine what it is to be home. And not just the physical home, but the state, and the city they live in, as well. When you couple all of that together, and you start to look at where things are going and where they’ve been, it’s no wonder that we are in this space that we are.

Now I’m not saying throw all of those other videos out and don’t pay attention to businesses leaving because those are also still really important. And if businesses do start to leave en masse, that will take jobs and a large tax base with it. That’s going to take the population with it too, no doubt. But right now? It’s just not happening.

So guys, in conclusion, this is what I’m seeing: a lot of people are redistributing themselves. San Francisco, as a great example, was very dense. It is actually the second densest city in the country, going into the pandemic. Now, a lot of people are leaving the city for greener pastures across the bay and beyond. And that appears to be a microcosm of the rest of the state.

That, in a nutshell, is what you see play out here with the redistribution of population. And with us still in a pandemic? I would argue that right now, it’s probably a good thing that people are not going to be so squished together. Time will tell but ultimately, CA still appears to be a place many folks want to call home.

I hope my blog on “Are People Leaving California En Masse?” has helped you.

If I can give you more context on the process of buying or selling your home, please do not hesitate to reach out. My information is below.

Here’s to all your success!

The market has shifted and you need to be aware of where we are going. I have created a free resource packed with all the information I tell all my clients when they start shopping.